On the brink of new year 2013, I made 2 resolutions- to get your grandma to lose weight and to be happy throughout the year. Being happy is a vicious cycle, you are happy, others around you are happy and inevitable you are happy again and the cycle goes on and on. One thing I realized very early on in this quest of continuing happiness was that it was important to keep running….not in the literal sense ‘running’ but just running ie going on and on. When things stagnate around you, life stagnates and it stinks…..hence I decided to run run run till I found out that it was literally running that I ended up doing J

Running for me has always been running from home into the car in the mornings, late as always to work, running from the car park to the shops to prevent my hair from getting wet, dragging kids indoors out of the rain , etc etc…..The running bug caught on this year….having avoided several attempts at being blackmailed to run by friends. Ram,from the strictly ‘I hate running’ camp warned that it was bad for the knees etc etc while varun from the ‘running, duh! So boring, you just run’ gave me a funny look as if mum, c’mon…..running, nooooo….its so boring…

( I desperately wanted you both to think of me as the supermom ;))))

Still went ahead with the plan.

Read read and read volumes about running etc etc and realized that probably it was more common than cycling.

Next, downloaded lots of apps including one which crashed my phone too …. But ended up using google tracks ( thanks Eric and Larry, love you both so much )

Downloaded some half marathon training plans (snigger snigger) …since when have I stuck to plans!

Bought some really expensive shoes and gear (after all, glamour is part of life, eh! ) you have to look the part!

And finally registered for the race!!!!

Hey presto….i expected to run instantly but that never happened and soon found myself 2 weeks before the D-day, in a sweat, wondering if I could even make it to half point….

TRAIN: training is a very sticky topic….when where how in this 24 hour span which feels like 2-4 hours.

But one of the easiest things about running is that you don’t have to wait for someone for good weather etc etc….you just run! Its easier to stick to known routes because you know how many miles you have done.

MUSIC: the most important companion while running is music. Have a theme song and follow its rhythm. Viji said that hers was ‘its all about money’ and I found myself running to that rhythm, till the day when I found my theme and nothing has stopped me since….check out ‘one two three four…get on the dance floor’ from Chennai Express……mind blowingly fast and fun!!!! Got me an extra 4 miles the first day itself J

I could not have done this without the help of you kids because you had faith in me! Varun started his sprints soon and I secretly wonder whether it was because of me running ( well, at leaset I like to think so J . it took me a while to get into the groove. I realized htat the first 3 miles are the toughest. After that, you ease into the pace and then for the next 5 miles at least you are set. The last 3 miles are sheer effort not because of physical exhaustion but because of mental boredom! Now , why should you go round and round like a hamster…..that’s when events like races help, when the whole atmosphere rocks and you are in sync with others like you.

Training for a half marathon is not easy and there are times when you will be bored. Get a running partner who will encourage you and run with you at times. But there will be times when you have to run alone….your ‘me’ time. Enjoy it.

In the beginning, my speed was around 13 minute a mile….somehow bc of lack of training, I never managed to get below 11 minute a mile ( yes, there was a 10 minute mile, no idea how that happened….never repeated)

Thankfully no one told me that the ‘normal’ running pace was around 10 minute a mile or else I would have quit ages ago. However I ran only 6 times before the D day ( and that was my training)….of course I am not proud of it but various reasons ( ummm…mmm excuses) prevented me from training the way I wanted to. The practice runs were 2 m, 3.6 m, 6m, 8m, 4m, 4m .

The eve of the half marathon, there was excitement all around. The family was happy for me and I was high on adrenaline. I never thought that I would be excited in something that ram was not involved but excited I was.

On the day, my partners in crime, Rashmi Subhash and Viji came home and we were given a lift by amar and mum. Viji, intensely stressed out, bc of the fear of being late and also because she was surrounded by us useless folks who cared not about the marathon but about the celebrations and margaritas following the run 😉

As usual, there were delays , but this time it was because of road closures all around the city centre. 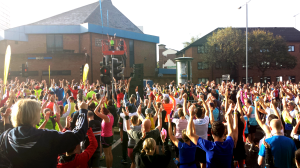 As soon as we parked and started walking towards the waiting area, I stopped in my tracks….there was a sea of bobbing head, swinging to warm up tracks. It grew bigger and bigger and louded by the minute. A sea of around 20000 people, joggers, runners of all shapes and sizes, ages surrounded me and soon we were drowned in them.

Rashmi and me did try to persuade viji to take the easy option, well, she was not impressed!

The race started and from then, I never looked back.

It was amazing to see ethe organisation. 20000 people running and an equal number of volunteers happily providing refreshments and drinks at the right places. Hats off to them. cheering people on does boost your morale; made me run faster every time i encountered a group of happy spectators and of course photographers. There were scores of power drinks and water bottles strewn around and they were removed with the same pace as the runners.

There were so many stories around, each runner had a story to tell.

From Jamie who was running for his mum, who passed away last year after suffering from breast cancer, to people supporting the Birmingham Children’s Hospital.

Met a lady from oxford, dressed in a Viking costume, compelte with nipple tassles , etc….she was around 60ish and power walked all the way, she said that this was her 8th half marathon this year and she had run in 25 marathons in total!!!! Wow!!! BTW, she is Elaine Horsey ( newspaper article )

The route was relatively ok. The first three miles were painful but soon got into my groove. Mile crossing signs along the way were the saviours and were like oasis in the deserts.

The best sight was however of mum waiting by Morrisons, ont he street, inthe rain to catch a glimpse of me 🙂 was thrilled to see her!! and love this photo with her at that moment…. 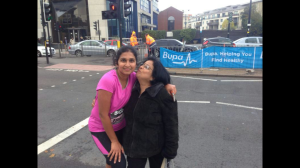 Within minutes of that precious kiss, i saw it!

The Finish line…..a feeling that i iwll cherish all my life and something i want you both to experience.

Caught up with Prashant at the finish line too, all chuffed and proud, having finished it under such adverse events faced over last few months. We took our medals and several photos.

I particularly like this one; shows the thrill in our eyes of having done the run! Although i am sure he thinks of me as the grim reaper ever since 😉

….one job done; one target achieved; one tick off my bucket list……

Already registered for next year half marathon with Ram J …..and boy, he was not pleased!!!!