Groaaan , I can’t do it today because my Garmin is dead…. and Strava too 😋

And so it started with 101 reasons to actually not do the long run , including its too early, too wet, too cold, too little time, Romeo needs me, etc etc. I snuggled deeper into my duvet only to be unceremoniously kicked out by hubby who by now knew very well the consequences of my missing this long run!

Miles 1-3 :
Dreams, dreams, big dreams….
First 3 miles were pretty uneventful and steady. My brain was on overdrive.. I was the queen runner and everyone was admiring my long strides, while in reality, I was still the curvy aunty next door trudging along, avoiding the sympathetic glances thrown by amused passer-bys. I realised that my head was actually so stuffed with my plans that by mile 5, I was getting tired of it.

Mile 3-6 :
Excuses – the hallmark of a wannabe runner
So the excuses manual came out and before I knew it, I had run 3 more miles conjuring up more excuses than a teen would come up with to avoid cleaning her room! The best so far was the thought of going back home for a trip to the loo even though i didn’t feel like it. Maternal instinct kicks in big time and so does the good wife manual. But i had to keep running…..

Mile 9-12 – The mirage
Now satisfied, the sounds in my head started fading away and the running continued. Soon, by mile 13, the sounds disappeared and I was surrounded by an eiree calm. I was floating away, no idea where and when.

Mile 13-16
When are we getting there…….
After that started the downhill. Not that I was tired but was bored. The rain and cold didn’t help either. Suddenly I spotted Romeo bounding towards me, his wonky , lopsided tongue flying in the air….. Ram’s appearance gave me a few minutes of peace and company for a mile. My mind wavered again with the thought of returning home with a rather drenched, dirty and smelly dog but I kept running. I was bored. I missed my running partner, I wished I had company. A trio running rather slowly in front of me now seemed like sprinters.
I was slowing down…

Mile 16-20 –
The dementors
My hair was wet, back sore , nipples chafed and legs hurting. The last 4 miles were painful but somehow i had to move on. The image of a nice warm car played havoc in my brain . I realised i was smiling, though it looked like a grimace, at anyone carrying a phone. The final mile home was the longest and I had to conjure up all the happy memories to slay that last dementor.

I was dragging myself up the driveway of a white washed house, the landing strewn with shoes of various shapes and sizes, the appetizing smell of food wafting through the chimney, the muffled sound of a dog in the distance. The door opened and Dad smiled……. i was actually home and this time it was for real.

A sign in the form of a card was waiting for me, as if someone was watching over me, my guardian angel, the third bird of my tattoo, Seema….. it was a sign indeed.
The sounds in my mind loud again , asking why, why, why do I do it…….. and I smiled and asked why not 🙂 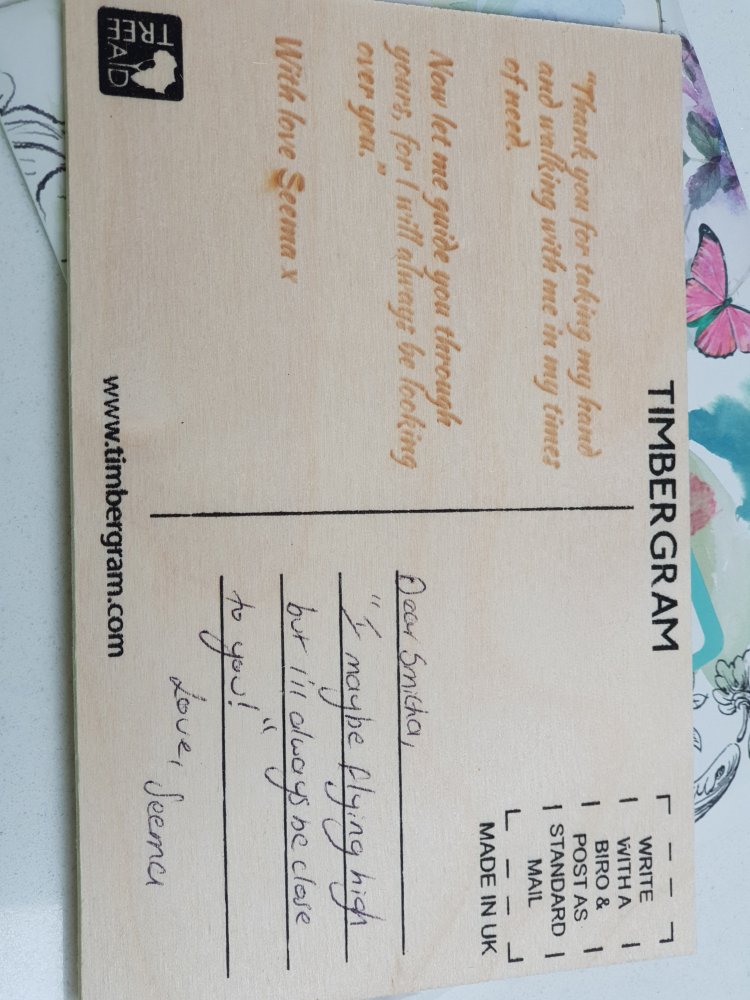