40 years ago, London was just a name in fairy tales and nursery rhymes.
30 years ago, the same London turned into a fantasy place, where I would often escape into, mingling with statuesque regalia.
20 years ago, London was real, in all its glory, flesh and sweat as I toured around for the first time, super excited, wide eyed, taking in all the monuments which I had read and re-read to the minutest detail.
I was in London!!
10 years ago, London was in me. Living, working, partying- I was actually living the dream. Breathing the crisp air, swing in my step, and music to my ears at each bend.
1 year ago, I visited London in a new light, something I had never in my wildest dreams imagined possible.

THE LONDON MARATHON –
The Mecca of Marathoners worldwide
A new entrant to the world of running, I would listen to all that the runners had to share, hungrily gulping each and every bit of information thrown my way in running clubs, magazines, internet and even random gossip sessions with those who had never run before! Friends from the K&D Running club swore by it. They all unanimously said that London marathon was an event to be experienced. We had to do it!!! Call it naive or foolish, having crossed the finish line of the Paris marathon just 2 weeks ago, we were ready!! 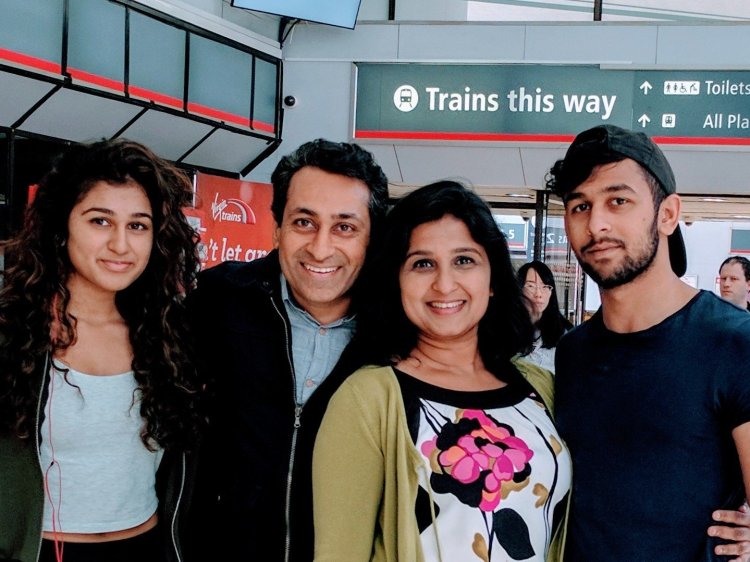 So as usual, ready and armed to the teeth with a plethora of information and anticipation, we jetted off to London. The expo was as amazing as expected. The customary fun and photo shoots followed and the rest of the evening was a breeze, pampered by Neha and Gaurav in their swanky Canary Wharf pad. 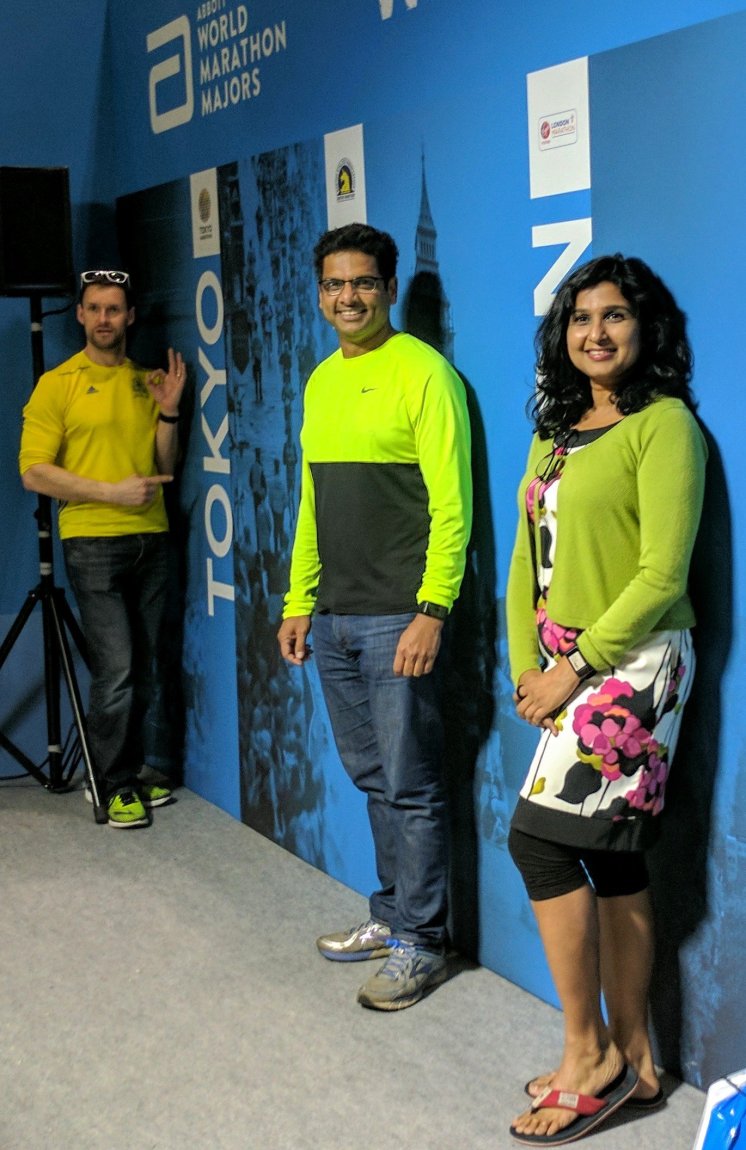 Sunday morning saw 2 warriors on a mission, flanked by an army of loyal supporters. Hubby pampered me till I had to tell him off and kids were unusually kind. As soon as we reached the station, the enormity of the event struck me, full on. Out in front, was a sea of bobbing heads, runners and supporters, family and friends, lovers and children, a whole big community which had united for a purpose, whether be it to raise funds, to make a difference or just for personal strength.

I spotted Mr Potato Head pushing his way past a group of teenagers, Spiderman, hastily adjusting his chafing bits ( or should I say bobs ) , Stegosaurus trying to re-attach one of his spines while a nun puffed away at an E-cig, one leg resting upon a Pirate! There were others too caught up in their own world. A weather-beaten face who looked as if this was his umpteenth marathon sat eyeing the shoes of a stressed first timer, a kind dad accompanying his nervous daughter and a couple tied at the wrist, obviously very much in love with each other to notice anything around them. Prashant hopped over, as beaming as ever and soon, we were off.

Settling in our pens, we went over the plan again. The first half to be run in a relaxed manner and to stay steady and strong. Luggage deposition area was incredibly smooth and amazing, excellent organisation. The bags were deposited in alphabetical order of our names in open trucks and we stood, soaking in the atmosphere, still in disbelief that we were actually doing the London marathon.
The first few steps, through the rough dirt path was crowded but resounded with screams of ‘go for it’, ‘you can do it’ , ‘go go go’…..We were flying.

MILES 1-5 : THE HAPPY MILES
We ran, happily chatting away on the incredibly crowded dirt path, Subhash stately and elegant and me, the bulky rugby player lookalike dodging the arms and legs coming my way. The 5k mark passed by quickly and I could see the novices stopping at the first sight of the water stations for their drinks, their faces flush with excitement. The couple who were tied at the wrist zoomed past, happily. I smiled at my fellow runners, picked up conversations with random strangers named Zoe and Fiona. All was well.

MILES 6-10 : THE CRUISING MILES
Mile 6 arrived and like clockwork, Subhash stopped and handed me a gel. I was too excited to have one but decided not to protest for the fear of causing distress to the ‘plan’! We seemed to be cruising along the serpentine lanes of London Docks, weary looking hamlets and non descript streets with their jaded shop facades. The thronging crowds cheered with increasing crescendo at each turn. By the end of mile 10, the first signs of tiredness crept in, the emotional high and excitement of the crowds adding to the claustrophobia.

THE DEMENTORS
By mile 11, I prayed for silence and magically the crowds thinned and their roars sounded distant. I was swaying and moving to the muffled beats of music in the far distance melting away my resolve. I started slowing down, invisible hands pulling me behind! Jolting free grfr the spell, i realised that it was fatigue thatthat making me delirious and so early on , it was not a good sign. It was only mile 13 and Subhash quickly forced another gel into my mouth. Soon enough, the shouts and roars came back again! We were running now along the smooth tarmac of Canary Wharf, our reflections unreal on the glass buildings on both sides of the road.

ARE WE THERE YET?
Fatigue was playing catch with me and I was busy trying to think of reasons to stop, to get a breath of fresh air and to shake Subhash off my trail so that he would go and finish the 26.2 miles on his own. My chimp told me to fake an injury but that was not to be! I longed to see the faces of our cheerleaders so that we would stop for a few selfies, but they seemed to have disappeared into the gallows of London dungeons. I even though of disappearing suddenly into the crowds only to realise that they would probably push me back again. Then I remembered Lisa Walker’s words- ‘when you feel like quitting, look down at your bib and remind yourself of why you are here in the first place! and so I carried on, grudgingly but carried on.
My speed kept varying but Subhash kept moving and appeared stronger and stronger as the miles passed by. Ever so often, Ram, Rashmi and Neha with the kids would pop by, shouting and screaming away, giving me the precious gulps of water and fresh air. I clung on to Ram, not wanting to let go of him, wishing that he would whisk me away to the warm snug comfort of home.

Soon we were on Tower Bridge and that moment was what I had been waiting for. I don’t think i can ever forget that point in time when halfway along the bridge, I burst out in tears, emotional and happy. That overwhelming feeling that I had bundled up in my heart, burst its banks and I was crying and smiling at the same time. A camera popped up in the distance and immediately, I wiped my eyes, put on my best smile and sprinted towards it, chest out and strong. I was the only marathoner in the world on that majestic bridge and I was there to prove it. That I can run! And that I did run!
That’s the moment when you actually realise that it doesn’t matter if you finish in 2 hours or in 6 hours. you are a marathon runner, you have done the distance, something that the hundreds of thousands of people thronging the streets could not do. You are already the winner!

EXPECTO PATRONUM
These happy thought immediately dispersed into thick air. A big booming voice in my head screamed at me to stop. It seemed to seize my ankles and I shuffled to a stop, bent over in agony, by the side of the road. I buckled to my knees and knew that I had hit THE WALL. The screaming group of onlookers suddenly fell silent. A hand pushed a bottle of water near my face, a toddler reached out with a fistful of jelly beans while a soft voice murmured ‘Smita, you are nearly there, just breathe…’. Tears welling up in my eyes, I turned around , defeatedly to Subhash, calm and composed. He held out his hand and said ‘ lets go, the end is just around the corner’…. Flashbacks of the past came flooding through. I thought of all our training runs, the fights, the little victories, of my kids who were so proud of their mum and of all happy moments sacrificed for training. It was as if I just had to get past the demons that were pulling me back to take charge of my life.. I took a deep breath and charged ahead, the crowd behind us erupting in joy and shouting out our names! 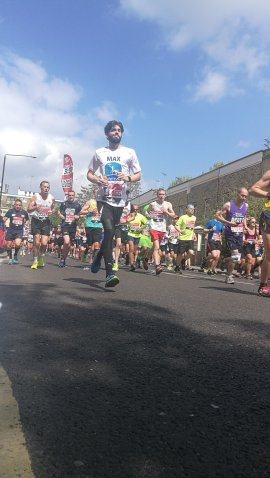 We continued from there, the crowds roaring becoming louder than ever. The sights of London came into view and we bundled past the West Bank and the river Thames when I saw it. The sign that I had been waiting for from the start! 2 miles to go. With renewed energy, we pushed ahead and suddenly in the distance, I heard my name being called out, a familiar voice that I could recognise anywhere and even in my deepest slumber. I thought I was confabulating again when I saw her, the most divine sight, mommy! There she was, a 5 foot formidable powerhouse, eyes ablaze with pride, pushing her way to the front of the crowds. My entire resolve and steel crumbled and I hobbled towards her, sobbing all the way. I just wanted to dissolve into her arms, to be hugged and comforted by her. I didn’t want to cross the finish line, I just wanted my mother….Subhash sensing the trouble ahead, suddenly dragged me back and pushed me forth, muttering ‘lets finish the race first, we are there……

THE GLORY and VICTORY

Rightly so, ahead was the FINISH banner. The rest of the distance was in slow motion. I was gliding and floating along , in no hurry or concern, towards the finish line. We stepped over the finish line, together and I knew that instant that i would never have had done it without Subhash, yet again. We staggered towards a bench and collapsed in a heap next to a First Aid station, smiling at the blue sky above us, taking stock of the runners sauntering across and the drums int he background. A few moments later, we were handed over our medals by the wonderful volunteers. The genuine smile and joy on their faces made all the difference. A volunteer hugged me and said that she was very proud of me. I believed her. What happened next was a blur, gliding down towards the exit in a trance, feeling the pride in the air, all victorious and emotional. I kept clutching the medal, not believing that it was real…..fearing that i would wake up from this dream.

My dream had come true.

I was a marathoner, once again…… I was the lucky few to have had the good fortune to run the London MArathon.