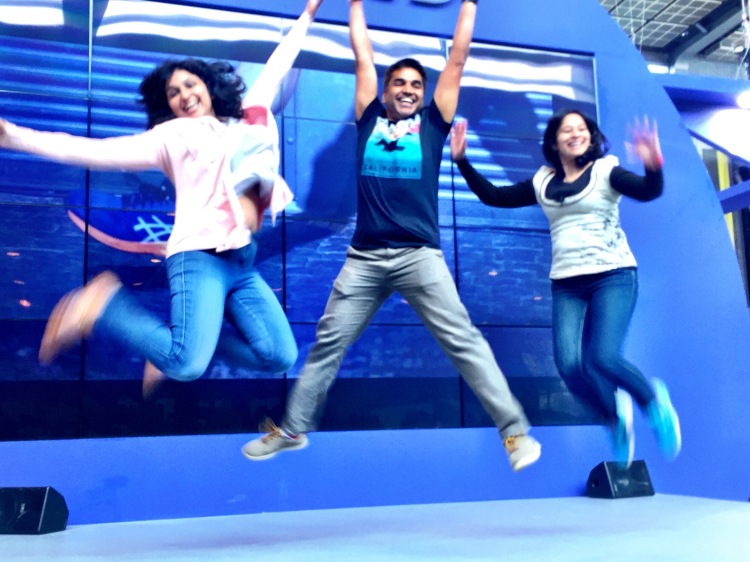 “Noooo……” That was the sound to which i jumped out of bed. The alarm had gone off at 4am, i had dutifully shut it and went back to the victory march near the arc du triumphe. And then it was 5am. We scooted to the airport and barely managed to catch the flight, huffing and puffing, heaving and sighing, ecstatic to have made it through.

Paris, upon arrival, was abuzz with activity. The expo area filled us with a mix of emotions- dread, apprehension, hope, worry, all mixed in one. We soon collected our bibs, did the customary photo shoot and boy, the atmosphere was electric. I glared, enviously, at the lithe lean bodies of the star runners, resplendent with slick calf contours. The “all too familiar ” flutter returned with a vengeance, this time occupying my tummy and my chest. I glanced around and saw the same expression on Subhash and Viji ‘s face and was perversely relieved to see that we were all in the same boat 🙂

The D Day!!!
The hotel room Champeret Elysee, was nice, pretty basic but nice. A relaxed thai meal, a cosy nap and a glass of wine in a cafe in front of the Eiffel tower tower followed. The evening was magical, had all the elements of Paris, sunset enveloping Eiffel tower, lovers kissing in the rain, pushy pedlars selling cheap lighted imitations, etc. 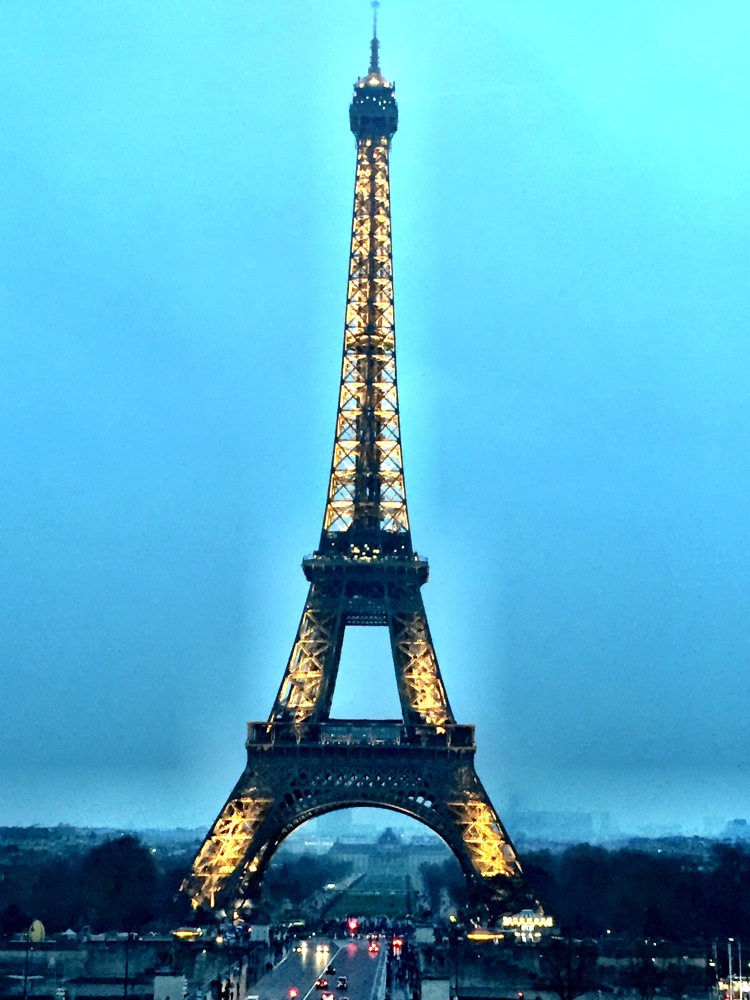 Breakfast  was exciting. There was an unspoken respect, a slight nod of approval at the sight of anyone with a bib. We stepped into the golden ray of the morning sun and everything after that was a haze…..  the magic had started. 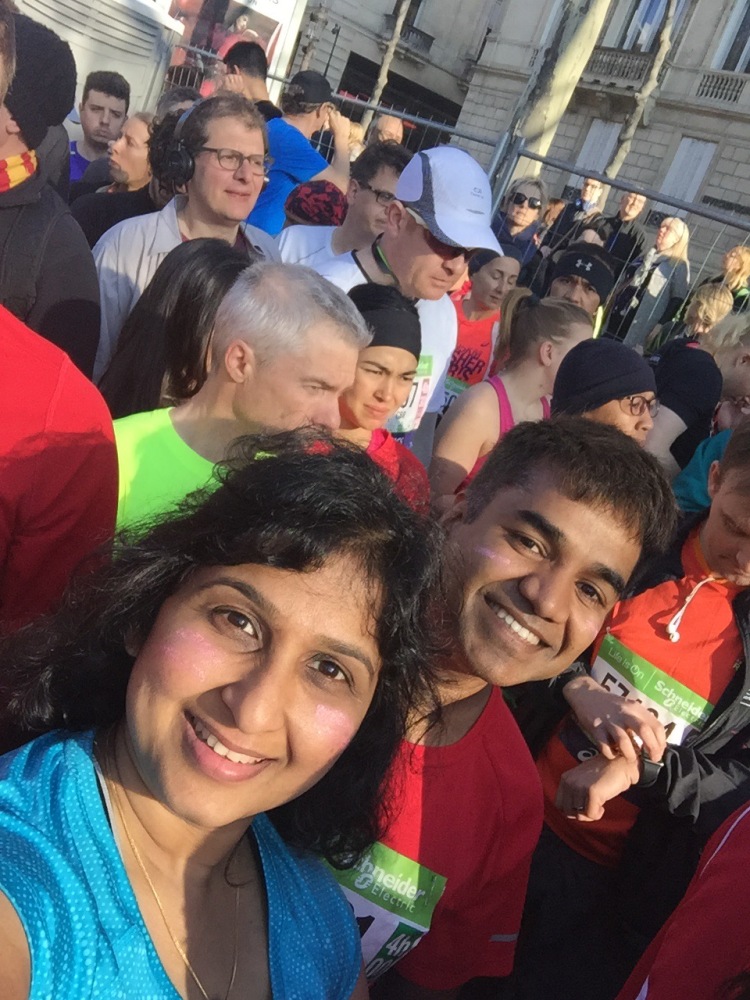 Arc du Triumphe, majestic as ever, looked glorious in the rain kissed sun. Runners thronged the  cobbled Avenue Foch and soon, we elbowed our way into anonymity. I spotted a slight clearing by the side and we hustled together. A funny smell kept us distracted and soon we realised that we were standing next to one of the open urinal pots! Seemed a bit sexist though as there were no facilities for women in the pens.

And soon enough, the marathon started…

The first few yards, we just shuffled towards the green arch which was the start point and soon people started dispersing. The road was straight, with a looming giant wheel in front. We passed through the Grand Palace, Concorde and Place de la Bastille . We soon enters the leafy park, Bois de Vincennes which virtually was transformed into an open urinal.  We turned left and spent the next 2 miles flying at a comfortable pace, happy, chatting, laughing, busily pointing out the signs to each other. Caught sight of the delightful hubby and  kids, whooped in delight and sped away. We grooved with the fabulous bands feeling that it was a dream.

Alas that was not to last and soon, the punishment of not paying heed to the well researched blogs set in.

Viji developed runners diarrhoea and looked with longing at any structure vaguely resembling a portaloo.

My thighs started chafing after an hour and soon started bleeding.

The route continued nevertheless, gently uphill from mile 4 and then went down after mile 8.  We stopped at a local shop, got some plasters, which I dutifully threw away instantly…..i called hubby and begged him to get my running leggings. Met him after an agonizing 13 mile by which time, back spasm had set in. Boy, he was such a pleasing sight and he waved something black in front of me. I grabbed it screaming – my leggings, my leggings, thank you thank you…. But they were not my leggings!! Hubby had mistakenly grabbed a tummy/thigh trimmer shorts. I held it out with contempt, proudly announcing I am not going to run my first marathon in my chaddhi ( underwear) . One look down at my blood stained shorts and i marched behind a van to change. I was greeted by the sight of batman, weeing in true batman-style, up in the air! Seriously! This is a marathon, you are at mile 13 and you still spray patterns on any wall, cmon boy, get a life!

He muttered an apology and we both turned out backs and continued.

Several tunnels passed, one of which was transformed into a spa with gentle music, water sprays and the promise of blue skies and white sands on lcd panels along the tunnel walls.

The new “leggings”  were a life saver but the damage was done alrdy. Because of my running style, i developed back spasm which continued to the back of my thigh and cramped my knee and calf. I hobbled till mile 18 and collapsed by the eiffel tower, drained and in pain.

Viji ‘s runs were getting worse and she started spending a good part of her race in the toilets.

Subhash, the only one standing, encouraged us gently  and we continued. A blade runner passed me by, giving me hope and courage.

Several old hunched folks strode past, proud and erect in their attitude. The parisians overdid all our expectations in their genuine support. Everyone was hailing us. A angel along the road chanted ‘allez, allez, allez….bravo’ making us forget our sweat. 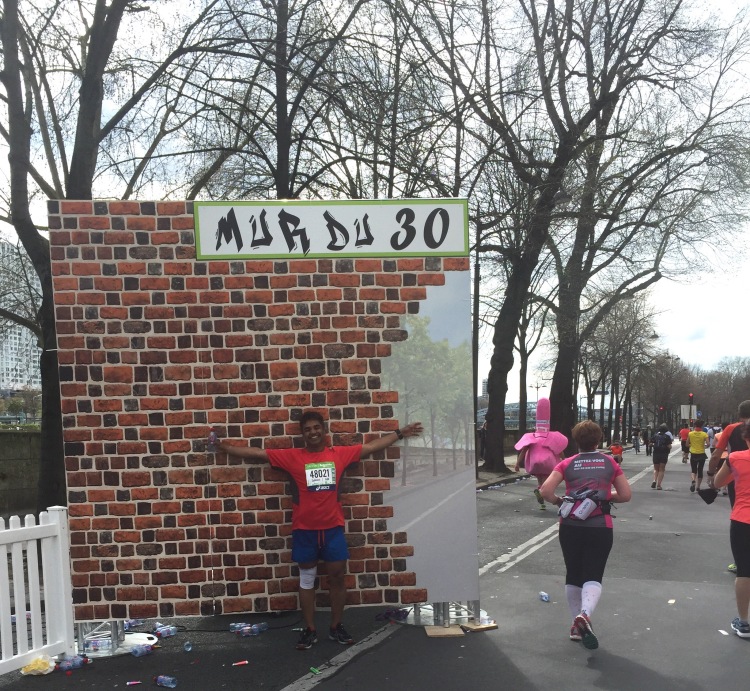 Leg cramps refused to budge and gels were of no use.

The last 6 miles were the most painful in my life. Passing mainly through the leafy windy paths of the Bois de Boulogne which was so accurately described in another blog as a death walk, I could actually hear the sounds of the  bugle of the firing squad

. By this time, i was finding it difficult to walk, let alone run. I sat, refusing to move on. Viji stood by my side, confused. But subhash came up, sat beside me and calmly said- you can do it, remember what we came here for…. We started together, we will finish it together. It gave me strength, not bc I could finish it but for him, i would finish it. A true friend in all respects.

I faltered again and again, stopping by an ambulance. The paramedic said to me that i had cramps and that i should stop. That frightened me so much, the very thought of stopping just 3 miles short of the finish line, just when we could hear the cheers and beats of the drums….. How could I give up now, never!

We were by now in the stragglers league….. From being in the 4.30 hour flag to the “no point in giving then a flag” team. But we were still proud, still together. My steps faltered but all of a sudden, i started sprinting at the sight of four cameramen. I was a champion, i must look like a champion and i must feel like a champion.  The uproar from the crowds resounded in my  ears, unreal, reaching a crescendo when i saw the green finish arch in the distance.

A flash of red was hurtling full force towards me…. Varun !!! Followed by the ever so fresh Rhea, her gorgeous hair flying in the wind. They clambered over the barricades screaming- Mum, Mum, you did it, you did it and suddenly the flood gates burst out. I started bawling like a baby in their arms. Varun supported me and gently pushed me forward. The security personnel came and escorted both of them away.

Subhash and Viji came closer, we held hands, a moment of unison, and we proudly stepped over the finish line. Hugs, tears, gratitude to each other, no words spoken but a lot said….. It was the test of a lifetime, my personal victory.

Ram scooped me up in his arms and i was home….

I am officially a marathoner…….. and the journey continues 🙂